While the Solomon Islands’ has a reputation for world class diving, from the months of November to April when the northern Pacific swells sweep in having done their dash with Hawaii, the destination’s extensive reefs and north-western facing islands come alive with some of the most perfect – and best of all uncrowded – waves to be found anywhere on the planet.

While the two best-known regions are currently Gizo in the Western Province and Santa Isabel Province, and to a lesser extent, the Florida Islands and North Malaita – there are still literally dozens of secret spots throughout this archipelago of 992 islands, the locations of which are closely guarded by a handful of hard travelling board riders.
The Solomon Islands offers surfers a good choice of accommodation – from village homestays to eco-lodges, hotels and resorts – but the best places to stay are the dedicated surfing camps, all of which package accommodation, boats, meals and most importantly of all, easy access to those all-important surf breaks.
Getting around the Solomon Islands is a breeze with Solomon Airlines providing a convenient network of Dash-8 and Twin Otter flights to the far flung reaches of his huge archipelago. Short boards do not present a problem but Mal riders be warned they may need to check with the surf camps first to see if they have longer boards in their resident quivers.
One piece of exciting news – a former Gold Coast sea captain has purchased an old trawler which is currently sitting in Gizo Harbour where it is slowly being converted into a liveaboard surf charter vessel. Plans coming to fruition will see the vessel – as yet unnamed – coming into action sometime in 2019.
With just 23,000 international visitors a year, and literally only a couple of hundred of that number being surfers, the Solomon Islands is a very long way from being discovered by the crowds – inevitably as the word slowly gets out, things will change but so far, they haven’t.
So now is the time to go. 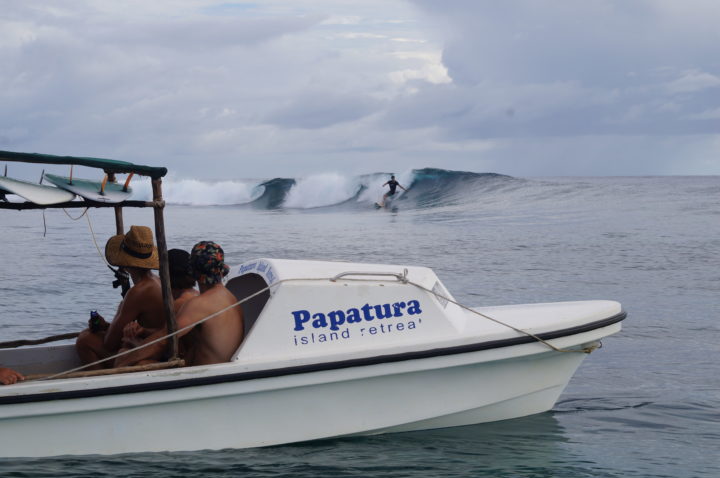 Gizo
Fun Level 9/10
Crowd Level 10/10
Perhaps the most easily reached region is Gizo with daily Solomon Airlines’ Dash-8 and Twin Otter flights from Honiara to the tarmacked Nusa Tupe airstrip. The Hotel Gizo is also a popular hang for surfers.
Across the water from Gizo lie Fatboys and Sanbis Resort, perfect for those seeking a touch of real comfort complete with hot water, ensuites, a gourmet kitchen, a fantastic bar – even Wi-Fi.
As for the waves, a few minutes by boat from Gizo township is Palonggi, a long, shallow right that’s well exposed to swell. It works best on bigger swells when the wave’s sections join up and it can get hollow. Palonggi breaks in front of a village where a handful of friendly local surfers reside and have helped set up a beachside home stay.
For those who like to go left, nearby Titiana’s is a goofy’s paradise, again a long shallow ride which when showing a bit of size allows surfers to loop through section after section with an easy paddle back. Truth be told Gizo is not the best place for beginners – you need to know what you are doing.

Santa Isabel
Fun Level 10/10
Crowd level 10/10
To the jewel in the crown, Santa Isabel which is home to two of the best surf stays in the destination ‘Kagata Surfin Frens’ and Papatura Island Retreat but the latter is without doubt one of the best surfing set-ups to be found anywhere in the South Pacific.
Managed by Australian expats Pete and Margie Blanche, Papatura sits on a beautiful sandy beach facing the main island of Santa Isabel, and is protected from the ocean winds. On the seaward side of the island sit several good surf breaks including Anchovies, PT’s, Kumma’s, Zoli’s, Donuts and Tarzan’s, the latter offering a perfect A-frame with barrels going in both directions. There are several more breaks around the reef directly outside Papatura and each one will have its day depending on winds, swell direction and tides.
The journey to Papatura is worth the effort – Twin Otter flights to the grass strip at Suavanao and a five-minute boat ride to Papatura Faa Island and the retreat which boasts a good selection of standard boards from stubby-nosed fish through to rhino chasers and a selection of Mals.
Best of all, Papatura Island retreat limits the number of boardriders to a max of 14 at any one time – so with more than 20 different breaks to choose from, you’re guaranteed an uncrowded surf.

Expectations
Perfect surf to suit every level of rider, bathwater-warm water, super friendly locals who like nothing better to share their waves with visitors and a complete lack of crowds – these are the hallmarks of any surfing expedition to the Solomon Islands.Just a 2-hour ,45-minute flight from Brisbane, the Solomon Islands are one of the very few places left on the planet where boardriders still have the opportunity to name the breaks. The destination literally abounds with waves and especially from October-April when the trade winds switch direction and the swells on the outer reefs can get upwards of 10’. But you can pretty much find waves in the Solomon Islands at any time of year. Just don’t expect size during the off months.
The best way to go is via package including all flights – international and domestic – all meals and accommodation and you do need to make sure the surf camp you are staying at can provide daily boat hire and surf guides such as Papatura Island Retreat.
And you also need to make sure you take all essentials with you – while the surf camps do have some spares, you will need to make sure you pack spare leggies, booties, wax, repair kits, etc. A small first aid kit for those inevitable coral cuts is also an essential.
While there are pockets of Malaria in the Solomon Islands, the Western Province and Santa Isabel are relatively mosquito free, but it is strongly recommended anyone heading there consults their GP or official travel advisory e.g. MFAT for the latest advice.