“The more I fly over vast untouched regions of our globe, the more clear it

becomes what an incredible accomplishment it is when human beings do

expedition to the Solomons the previous year. Canon wanted to shoot something

amazing underwater that showcased the low-light capabilities of their technology

bio-fluorescent turtle Dr. Gruber had discovered. To my delight, they got excited 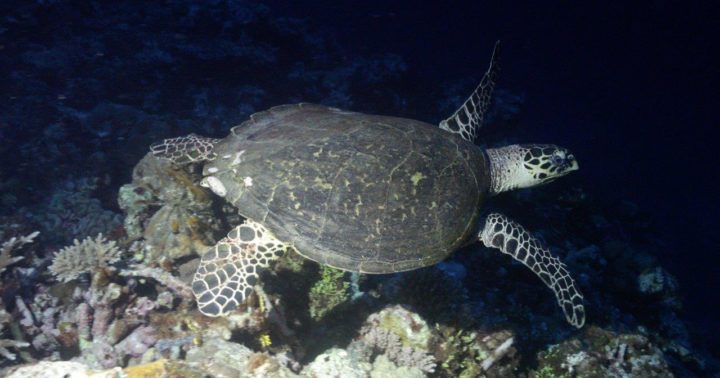 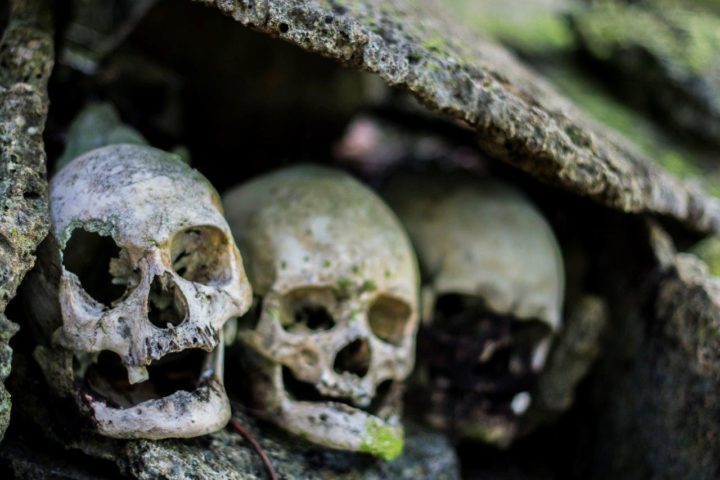 Needless to say, I was already feeling quite lucky and honestly still enjoyably

must be incredible because of their isolation, the vast number of islands and their

proximity to the warm equator. I sensed that the Solomons were still wild and

largely undiscovered and I was right. 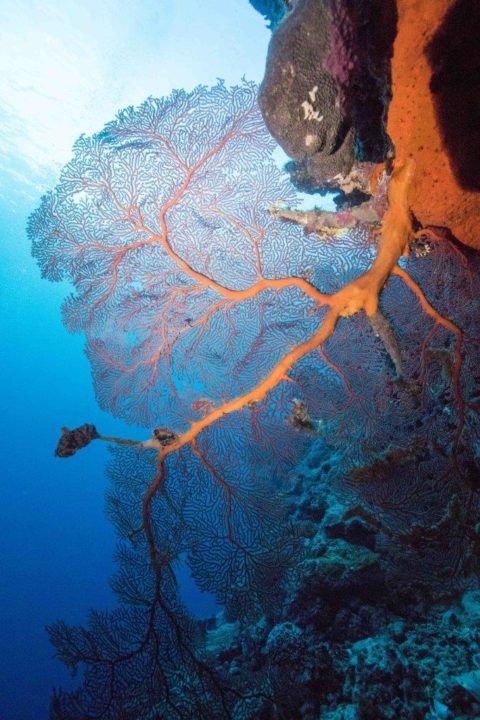 warm water and tropical South Pacific islands could be, however, I would always

to discover them, before people had ravaged them. Since then I have always

yearned longingly to get that opportunity of true discovery somewhere and

sometime in my life.

aircraft in the entire 1000 Solomon Islands as we began our descent into Munda.

the hype on the internet of malaria, dengue, crime and saltwater crocodiles (that 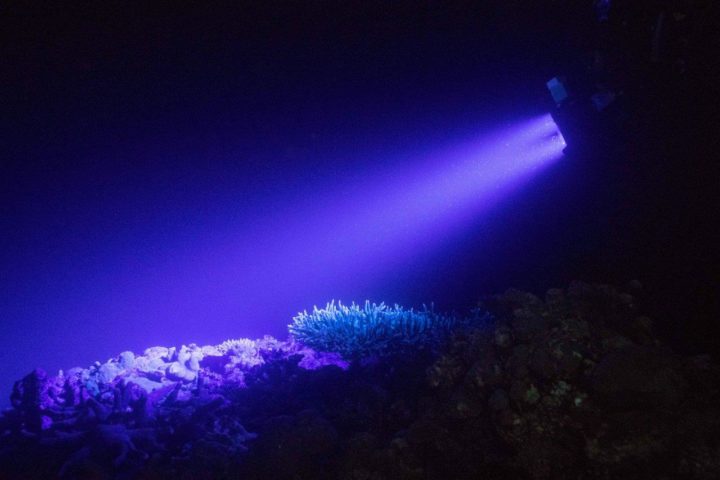 locals into a powerfully competent and passionate group of dive professionals. I

immediately felt relieved meeting Belinda as her confident introduction and

success of the entire job would be depending. We then all walked a few hundred

yards from the dirt strip through a tiny town center to Agnes Gateway Hotel,

which would become our charming new home and our base of operations.

exploit their resources to rapacious logging companies and succumb to shortsighted greed, or they would take a path of eco-tourism and resource

to that bright future as divers in search of real adventure have the resilience,

experience and they deeply appreciate untouched natural beauty and underwater

wildlife. The past year had already shown proof of concept in that Agnes

and she had employed a team of ten locals in her dive shop alone, not to

artisans, fisherman and farmers that benefit from dive tourism.

I knew that by providing film and photography of the amazing dive sites, WW2

wrecks, healthy coral reefs and unspoiled islands; those images could be used

as a powerful tool for Belinda to increase sustainable tourism, which would

local people. So we decided to shoot during the day to capture images of her

bio-fluorescent turtle for Canon. It turned out to be the most amazing diving

adventure of my life, by far.

Besides the completely otherworldly coral reefs and wall dives, the Solomon

Islands were the site of the most ferocious air, land and sea battles, which

changed the course of WW2 and multiple hundreds of aircraft and ships, remain

missing and undiscovered in the surrounding area of just Munda alone. Belinda

guided me on several dives, one of which was my deepest dive ever, at 170 feet.

We went on to dive multiple World War II wrecks, including airplanes and a

Japanese supply ship, the Kashi Maru, that had been sunk right off shore. We

also dove the coolest cave that defies the imagination.

shore; we hiked our equipment in over land to get to the small entrance and dove

down through a spectacular cave opening with photogenic cavernous sections to

a depth of 100 feet. The dive ends up leading back out into open ocean through

a vacuous underwater cave exit. Once you are birthed back into the light and into

shear wall dive for Pelagics. This location and dive profile are completely unique

if the government approves it. We must share this incredible dive with as many

divers as possible and get this unique treasure protected.

At night we would dive Mbigo Mbigo for its amazing clarity, unmatched coral

formations and turtle population. By shining blue light on the corals and turtles

underwater world at night. Using the Canon ME20F-SH, we ended up shooting

second night, which completely released stress for the entire team and allowed

cinematography of our expedition team. Happily, our clients left the island with

from Munda by boat. Tetepare is the least developed and most remote island in

the Solomons and is home to vast untouched jungle, monitor lizards, Dugong,

species of fish, butterflies and frogs just to name a few. It is also the home of a

conservation group that focuses on helping leatherback and other turtles

support to continue. We shot a short film to help communicate their mission to

donors. Tetepare has a very small eco-resort that is designed to let tourists

income to power their conservation efforts in the future. Our overnight stay there

was amazing, with inspiring people and stellar food.

never before explored underwater landscapes thanks to Belinda and her team.

she insisted I name.

Our first was “Tangerine fields,” inspired by the Beatles song “Lucy In The Sky

With Diamonds” written about a psychedelic journey to an otherworldly place,

which is exactly what that amazing dive felt like. Then “Magic fingers” which is a

brilliant labyrinth of discoveries and amazing photographic opportunities and

finally “The Blue Wall,” which was my personal favorite as the picturesque wall

descends into the abyss, where tides move massive amounts of water from deep

open ocean into and out of an epic island chain. We saw a large Hammerhead

shark, and many others feeding at dusk. The wall itself was covered in amazing

coral structure and felt healthy and teaming with life. I wish I could dive it

The untouched natural beauty of the Solomons is felt in the people I met, as well

as in the landscapes themselves. We stopped in the small remote village of

open and playful. They were happier holding their hand made sling shots and

seem to sit alone in a room full of people, glued to their smartphones like digital

These kids were connected to each other, the natural world around them and to

their entire multi generational families who would all be living under one roof. It

family to be progress.

revered local tribal leaders in the not so distant past. The conch shells on the

journey. When I was invited to set foot on to this exotic and sacred island, I was

brought there and by the violent axe wounds visible. It was a reminder of how far

ever to be in this place.

I have been fortunate to travel the world directing commercials. I have made a

career of finding rare beauty and being the very first to capture it, however, I

have never had an opportunity like this, for my work to help create a lasting and

positive impact on a magical place like Munda in the Solomon Islands. My hope

community, that we will all help Belinda on her quest to preserve one of the last

healthy underwater eco systems on the planet for future generations, by simply

visiting Munda and diving this underwater paradise. Each person who books a

force at this crucial time in Solomon Island history.

By the way, I only saw one mosquito and oddly it was on the airplane back to

Brisbane. I used repellant and took no malaria meds. The people of Munda were

open, friendly and delightful and crocodiles don’t like coral reefs because they

have soft bellies and they stick mostly to the swampy mangroves, but they do

add exotic dimension to the stories and keep out meek vacationers, which I see

as a total benefit.

A bit more about author Klaus:

Klaus Obermeyer is a bold, modern-day adventurer, visionary leader, and true inspiration to all who have had the distinct pleasure of being swept away by his brilliance. Klaus is a superbly talented cinematographer and creative commercial director, driven by finding true beauty in exploring uncharted territories and gifted in sensitively uncovering and awakening human greatness. As ocean advocate, Klaus is passionate about protecting delicate marine ecosystems and conserving the vast jungles of the last frontiers on earth. Klaus also knows how to embrace life: days are filled kite-surfing, scuba diving, freediving and skiing. Klaus lives an extraordinary life pulsed by seeking a state of deeper being and understanding and sharing that with the world.