In our fast paced, modern lives, where everything is easily available and where people can find you at the blink of an eye, how do you just ‘switch off’.   How do you disappear if only for a while and disconnect from the everyday.  Are there actually people that still live off the grid away from the hustle and bustle of everyday life and in line with nature.

The 91st sand-dune in the Kgalagadi Transfrontier Park is one such place.  A place where you are officially lost.  No cell phone, WIFI or TV signals.  Where no telecommunications exists.  A place where there is nothing but the silence and sounds of nature around you.  Even your passport is scanned out of one country, but never actually re-enters another.

This sand-dune in the middle of the Kgalagadi Transfrontier Park, a conservation area twice the size of Kruger National Park and part of the Kalahari, is where the Khomani San can be found.  Often referred to as San people or Bushmen, here in the Kalahari is where this indigenous tribe of hunter and gatherers still resides.  The San people are considered to be the first inhabitants of what is now Botswana and South Africa.

!Xaus Lodge situated on this 91st sand-dune, offers visitors not only the chance to escape the everyday life and switch off at a fabulous location, but is a lodge that has been developed for the good of the local tribes and communities.  !Xaus means ‘heart’ and was named by a group of visiting Bushmen.  It symbolises the healing of relationships, restoration of dignity and growing aspirations of the local communities that have had their rights and their lives taken away from them over the years. 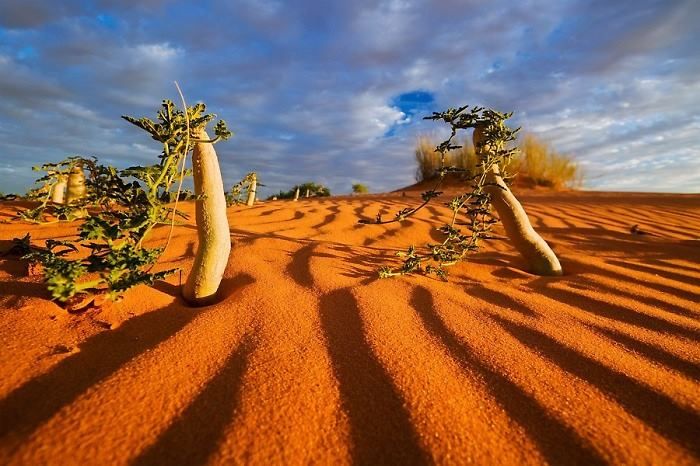 Indigenous tribes of Africa are unfortunately struggling with the realities of modern life.  Local governments are stopping them being able to continue practicing hunting, gathering and herding.  Drugs and alcohol are rampant and easily available, unemployment is large and general moral through tribes that are used to old lifestyles are struggling in the modern world.  Places like !Xaus lodge are offering tribes the opportunity of learning new skills, employment, ownership whilst also encouraging their traditional ways and values.

The lodge itself is decked out by the Bushmen tribe with local art and furnishings.  However, a ‘tribal village’ has been set up for the benefit of tourists to see how the Bushmen dress, how they make their jewellery and to give tourists an insight into the Bushmen life.  This is staged for the tourist benefit and does cause some controversy as the Bushmen in this region wear regular clothes (rather than running around nearly naked) and perform regular jobs.  Without this display though, there would be no way to see the Bushmen culture and creation of their crafts as their traditional ways of life have been stopped.

The Himba tribes and villages of Northern Namibia are a similar situation although they have managed to maintain their culture and traditional ways of life over the years.  Himba still live the way they used to live their lives even in the established ‘tourist’ villages.  They do not get dressed in modern clothes once we depart.  They do not go back to bigger houses as opposed to their small huts.  They live in the villages that we visit, going about their day to day lives.  The Himba are the indigenous group of Northern Namibia with a population of around 50,000 and are traditionally pastoralists and most prominently defined by their red ochre covered bodies.

Visiting Africa, apart from seeing the animals and the natural wonders of the world, is also about seeing the indigenous tribes, learning the history of these original African people and cultures, getting  a taste for what life might have been like once upon a time without the big cities, when everyone lived with nature and required basic survival skills.

However, what is a fascinating and captivating historical and cultural experience for some, is seen as a human zoo for others.

There were opposing views even in our small group of travellers.  Some were opposed to taking photos of these indigenous tribes.  Some didn’t want to hear their stories or take part in the walk through, feeling like they were intruding on people’s lives.  Some felt like tourist agencies were exploiting and making money from the locals.

It is a fine line.  There are many opinions and yes, there are villages that are run in such a way that the locals receive little or no benefit.  For other villages and tribes however, it is employment.  It is a way of showing what their life is about.  It is a way of them selling their jewellery to tourists for some extra money to survive in this modern world where money is now needed.  But more than that, it is about education.

Nelson Mandela said it best, ‘Education is the most powerful weapon which you can use to change the world’.  Many, like myself, go to Africa to learn about the history, culture and way of life of the land and its traditional people.  We travel to be captivated by the stories of these indigenous tribes and of life in Africa in general.  We go to experience a world that is very different to our own.

Sometimes it is a picture that takes the place of a thousand words.  One simple photo creates a memory and an experience that lasts a lifetime whilst only leaving behind a footprint. Although our tribal experience may not change the world, it may well educate us and aid in changing our thinking, opening our minds and our hearts to how others live and understanding the struggles of these old cultures in modern times.

Words and Images by Natalie Tambolash