There are just two ways to reach the snowbound Zanskar valley in the Indian Himalayas in winter: over the frozen Zanskar river or the snow covered high passes. Claude Balsiger and Martin Bissig took both routes on their expedition; across the ice to reach the valley and over the passes to get back out. 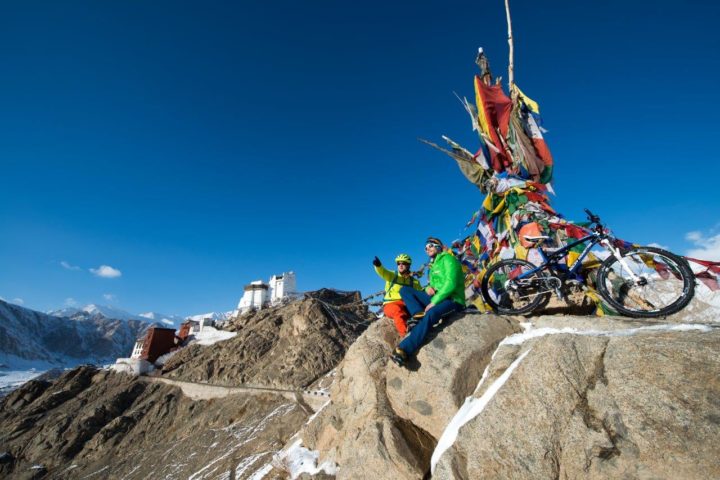 How bad can it feel to fulfill one’s dream? For me, it feels bitterly cold. Breathing heavily with my head hung down, I’m standing next to my bike. Mountain biking at minus twenty degrees works surprisingly well. But when a bitingly cold wind is added, then nothing works. My friend, Tundup, catches up with me, he has cared for me since Day One. “You have to keep moving, or you’ll get too cold, my friend,” he says to me, pulls up the scarf and moves on. I mount the bike and start to pedal. The ice crunches under my wheels and I continue up the river. I was first here six years ago; I was looking for single tracks in the summer and met Tundup. Even in the early days of our friendship, he wanted to persuade me to do this winter adventure, ride a mountain bike down frozen rivers to the Zanskartal. This is how my dream to cross the Himalayas in winter with a bike and skis developed. Now I stand in the middle of this icy dream. We want to cross the Himalayan mountain range in four weeks, on a bike, on foot and on skis. We start in North India, in the town of Leh, then I cycle almost 300 miles on frozen rivers through a gorge to the end of the Zanskar valley. From there we ski southwards and hope to reach our goal, the Indian town of Manali, within four weeks.

Cruel Companion
It’s morning and it’s really cold, bitterly cold. The morning is not a pleasant companion in a Himalayan winter. It is, in fact, the most evil time of the day, I regularly hit a mental low point. I’m lying in my thick sleeping bag, my eyes squinting out of the small opening but my body lies motionless like frozen chicken in the feather down. I pull the zipper down and cold, minus 20 degree air streams into the interior – the day’s misery begins. Socks, pants and jacket, everything is with me in my sleeping bag overnight, here wet clothes freeze stiff in a very short time.
I share the icy sleeping space with Thomas, my expedition partner. The aspiring mountain guide is responsible for the demanding return journey on skis. With thick down gloves we force the tent into its sheath. Then our cook, Sonam, brings us some hot tea. I cling to the warm cup, press it against my cold nose and let the steam warm my cold face. It happens every morning.
When I mount my bike an hour later I’m looking forward to the warming movement – but the airstream makes things worse. My feet are in massive hiking boots, but they don’t help much. They burn with cold, my toes feel more like padding at the end of the shoe. My “Rocky Mountain Altitude” is perfect for the freezing temperatures thanks to plastic pedals, spikes, insulation and caliper brakes, but I am not capable of handling this icy adventure.

Barren Trail
For three days I’ve travelled along the ice covered Zanskar River. The surface is often so smooth it offers no support. The 400 spikes on my tyres sink like little claws into the crystal-clear surface and keep me on track. It’s a really fun track, with little curves and dips, that winds through the ice on the white surface of the river. After travelling three hours through the canyon we finally see the first rays of sun on the valley floor and that warm me up a bit. Now I’m euphoric. The breathtaking scenery and a trail that couldn’t be better, the ground is very firm and the track full of variety The track leads through a gorge with rock faces several hundred meters high, the river is just ten feet wide in places. Minutes later, the landscape is completely different. I now pass through a small plain; here the frozen river is nearly 100 feet wide.
For the Zanskari, the inhabitants of this Himalayan region, the route across the river in winter is their only link to the outside world. My friend Tundup has done the route dozens of times on foot and told me exactly how to behave on the ice. The biggest dangers are watery and crumbly ice: I must spot these before drive over – otherwise I’ll fall through. Usually the ice is between one and three meters thick and could carry a tank.

Official Recognition
After five days in the ice gorge the valley opens up and we reach Zanskar. The main town could be straight out of a Western movie: Padum, that’s the name of the dump, consists of a few houses standing at an intersection. When I reach it on my bike, people rush out of their houses onto the street, looking at me in disbelief and whispering among themselves. Suddenly a well-built man steps into my path. He comes up to me and his broad face under a thick fur hat grins at me: “Welcome to Zanskar, we’ve been waiting for you,” he says to me. How can this giant know me? “The rumours reached us a few days ago, but we did not believe them,” he continues. “Now we know that in fact the first man with a bike has crossed the frozen river. Please come with me,” he says. You don’t contradict a man like him. I climb off of my bike and follow him through a large gate into a courtyard where a small blue house with a tin roof stands. Above the entrance is a hand painted sign, “Sub-District Magistrate of Zanskar.” He is the head of government in the region. His office is small and stuffy, I sit between a stack of documents, half a pita bread and a Buddha statue. As soon as he sits down on his chair, his assistants come into the room and give him letters to sign; indifferently he scribbles something on the crumpled paper. Then he finally speaks to me. He wants to congratulate me on my success, the first man on the frozen Zanskar with a bicycle. This is a remarkable achievement. He wants to congratulate me on behalf of the Government of Zanskar. In the following hour, I am lectured on the chance of survival in the Chaddar. He releases me with an official Letter of Recognition from the government. Not everyone can boast of such a souvenir to take home!

On the Ridge
Two weeks later my ski partner, Thomas, and I are lying in a small tent on the 5100 m high Shingo Pass. I had to leave my bike behind because I could no longer carry it through the fresh snowfalls. There is a storm outside and visibility has been reduced to ten meters. Yesterday on the ascent we got stuck in darkness and fog and had to put up the tent on the spot. We made a tough decision in the evening, the risk in continuing the trip was too high. Poor visibility, the avalanche risk and depleted reserves speak for themselves. We have to turn around and re-trace the journey made over the last three weeks – just four days before reaching our destination.
The journey back is a race against the thaw in which the ice breaks up in the rivers. If we don’t get back across the river before the thaw, we will have to spend several weeks unable to leave Zanskar. So we press on as for long as our feet will carry us. We can’t use either bike or ski in this landscape of snow, ice and water. In just five days we cover 160 kilometers back through deep snow, ice and water. We take very few breaks and arrive completely exhausted at the lower end of the frozen Zanskar River as the final group for the winter,
I live these days with an intensity never before experienced. Just hours lie between the bitter misery of the morning cold and the euphoria on the ice trail. I no longer mind crawling out of my sleeping bag at minus 20 degrees or walking on bleeding feet. The only things I really need are my sleeping bag in the evening and a warm soup for dinner. This is pure life in its most extreme form, painful and euphoric at the same time. I look forward to a comfortable bed and lots of delicious food at home – but I don’t yet want to wake up from my expedition dream.